As Common In, artists and participants travel across Amsterdam, writer Ruth Spetter and photographer Sander van Wettum travel along. They are observer-participants and reflect – through text and image – on observations and experience. This blog reflects on Hosting Soil, a performative artwork in the public spaces of South Amsterdam.

On October the 30th we attended the open-air performative intervention by Franziska Goralski, Kitty Maria and Elise Ehry in South Amsterdam. Upon arrival three persons – two dressed in blue airhostess costumes, one in a white overall – stood in and around a pit they were digging in a patch of grass. The person digging was standing thigh deep in the pit while being covered from the rain by an umbrella held by the two others. 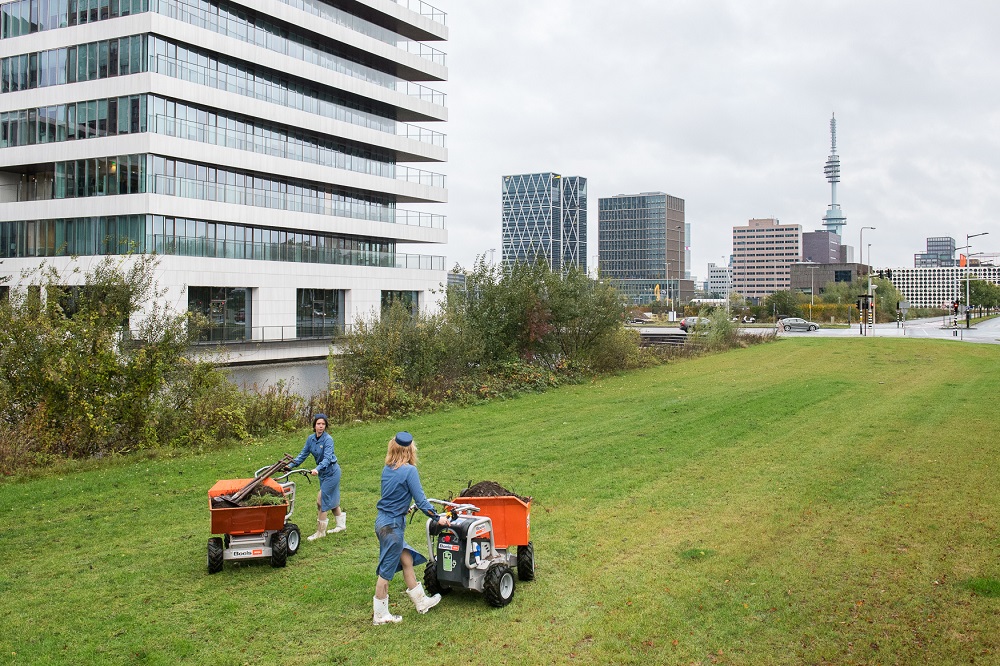 The performative intervention was set up on two locations in Amsterdam South where an excavation-like pit was dug of roughly a cubic meter. These spots were not random: they represent respectively the most expensive and the cheapest land of the city district. At the first location the team heaped the soil upon two electric barrows. The soil they also used as a makeshift picknick table from which to eat a two-piece lunch. The team took the carts to the second location a thirty-minute walk away, where they dug a second pit. Despite its proximity, the land price increased from €3849 per square meter to €4491. The stewardesses filled the empty hole with expensive soil from location A. Finally, a small ritual-like practice was conducted, ‘initiating’ the soil by the person in white. A few objects were placed upon the ground – including an inscribed wooden plaque reading ‘In Solidarity – Sleep Well’ – creating a tiny shrine (although the association with a grave is also in place, due to the handles of the spades being carved like crosses.)

Many elements of the performance induced discomfort. The activities demanded hard physical labour: digging, shoveling, carrying the soil, and pushing the carts. The performance lasted several hours and it was clear the group became tired and hungry. The food looked like it was dug straight from the ground and heaped upon a glass dish. My discomfort was only enhanced by the décor; your typical cold, windy and rainy autumn day. The rain made the performance even more dramatic by turning the soil into dirt and blubber. Their sticky hair could have been rain as well as sweat.

What I appreciated was the way the dreariness contrasted with – and came to dominate – the initial appearance and presentation of the performers. The persons in blue were dressed in airhostess costumes decorated with delicate embroideries. Costumes have a communicative function that inform people about the role of its wearer. Traditionally, airhostesses are expected to be kind, caring, and feminine. During this performance the frame was flipped entirely, as the supposed airhostesses were the ones doing hard and dirty work that is often perceived as masculine. Furthermore, they were the ones being cared for by the person in white, who offered them food, shelter from the rain, and support.

This play with assumptions made visible the element of care, which was again confirmed by the careful treatment of the soil, particularly during the final ritual when the team watered and nourished the soil. There was a moment when the group ate from the soil, using it as a makeshift table, which I interpreted as a recognition of mutual care: watering the soil by people, and the soil nourishing people in return.

The performance results from the initial bafflement by one of the artists when stumbling upon a municipal map  indicating price differences among patches of land. Land value can be – and often is – measured in monetary terms, but there is a certain absurdity and arbitrariness to it. Something that is so fundamental to human existence – land makes up the space on which we exist, where we live, produce, consume, a space we transform constantly – could be defined in more than just monetary value. The indicated prices reflect center-peripheral power relations, where parts of South Amsterdam, as a worldwide financial center, are valued highest monetarily. 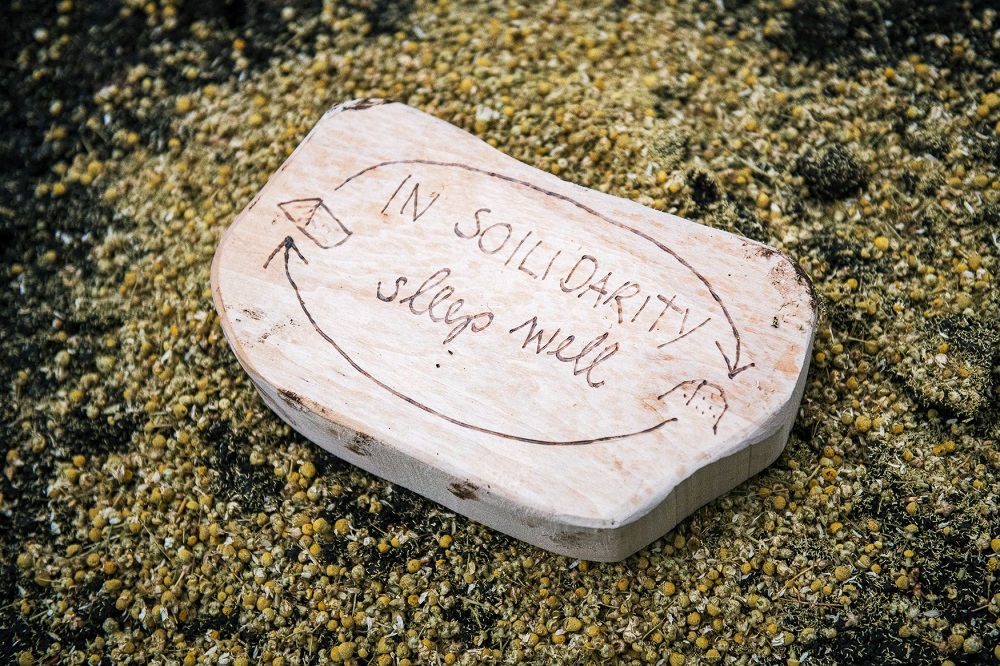 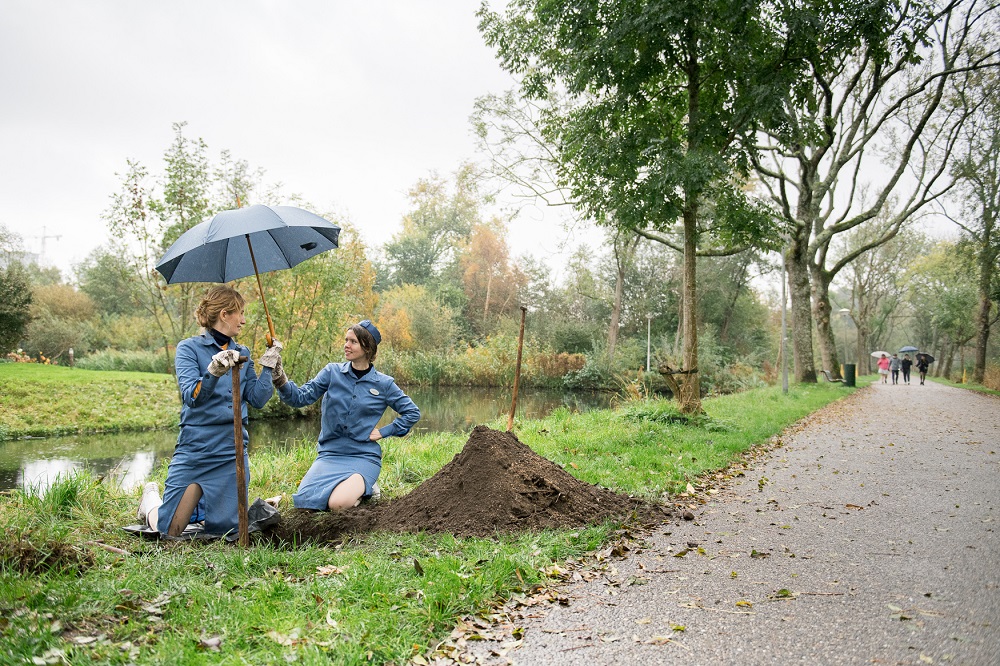 The performance seems to address the issue of agency, as the artists take it upon themselves to actively manipulate the soil that is subjected to market mechanisms that determines its value so narrowly. The ambiguousness to me lies in the futility of this agency: three people taking it upon themselves to achieve a herculean task. The performance shows people taking ‘matter into their own hands,’ but at the same time the hard labour is in vain. The physical and material approach to the soil stands in stark contrast with the abstract, reified reality of land prices and the capitalist system in which it is embedded. What comes to mind is the saying ‘bringing sand to the beach,’ and indeed, sometimes putting effort into making the world a little better can make us feel just like that. 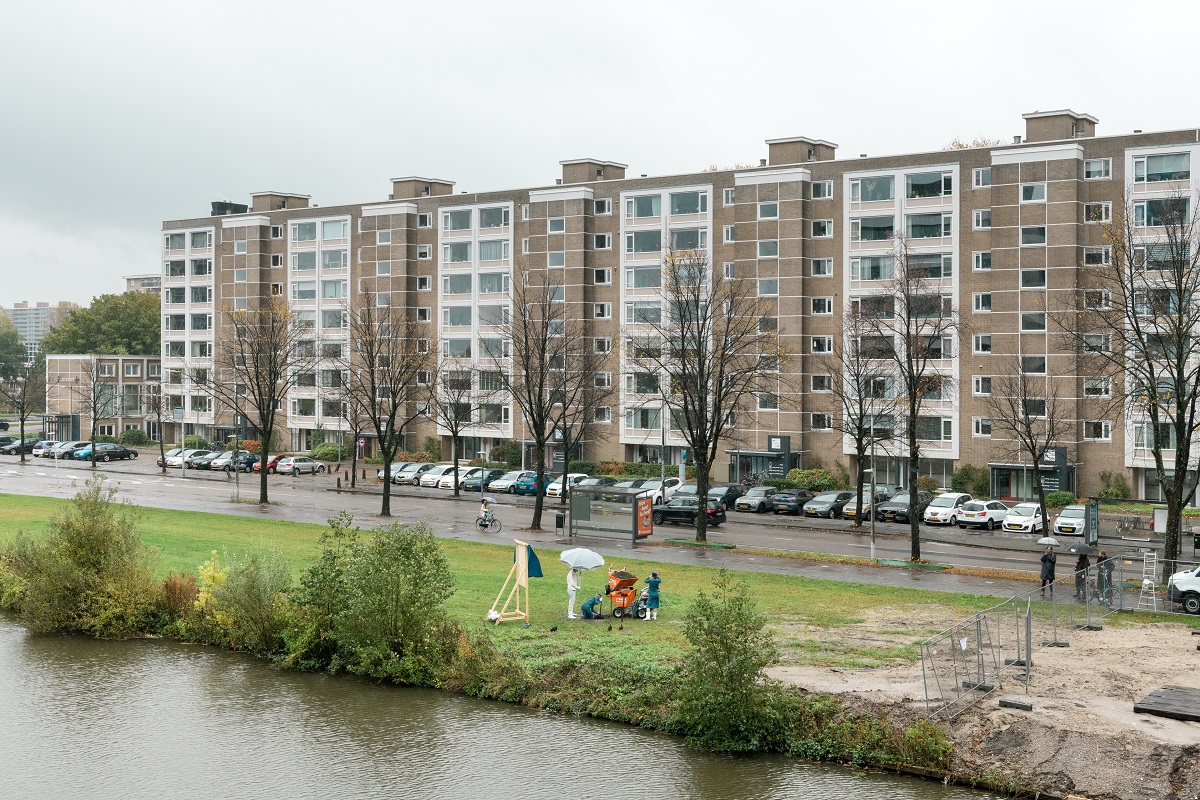