As Common In, artists and participants travel across Amsterdam, writer Ruth Spetter and photographer Sander van Wettum travel along. They are observer-participants and reflect – through text and image – on the art works and events. This time: Swarming the City.

The previous week I had fun mysteriously telling people that I would participate in an activity called ‘Swarming the City.’ It sounds like something a horde of bees would do – but it was not this. So, what did it turn out to be, what is ‘swarming? And how does one swarm? Swarming is an activity where, to the sound of music, people dance around while gradually moving about. As a result, a group of people, indeed resembling a swarm of bees due to movement and formation slowly make their way through the streets. 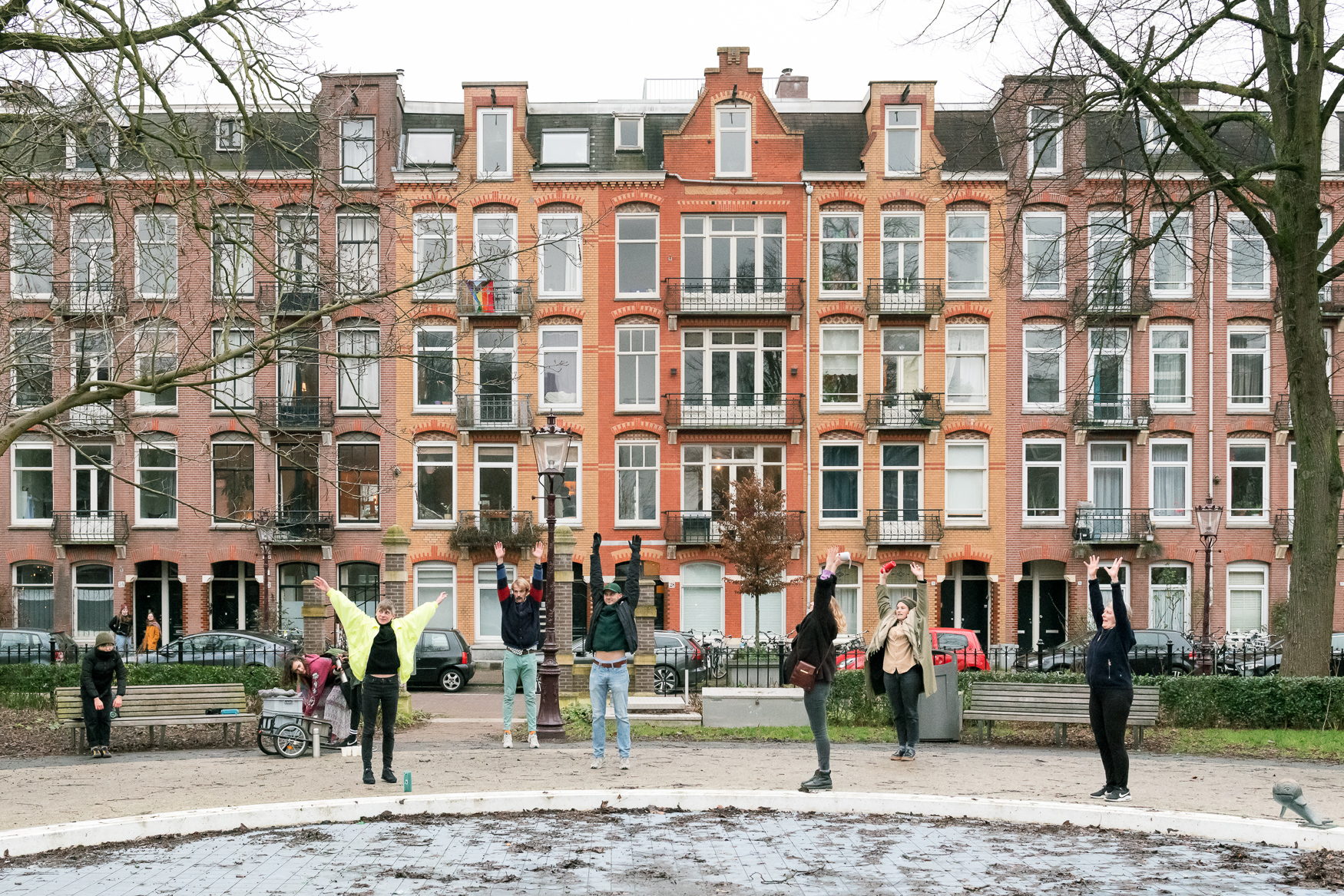 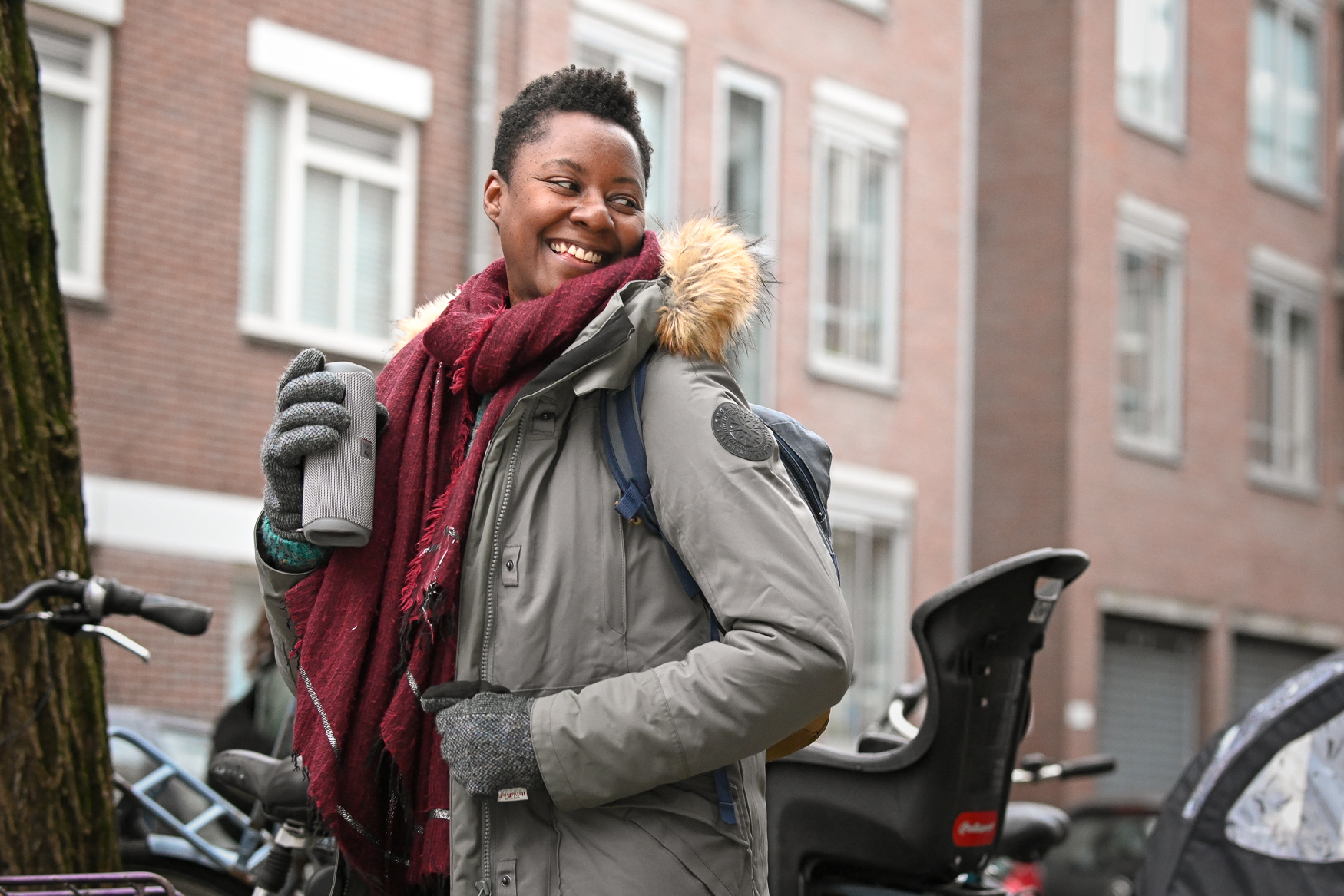 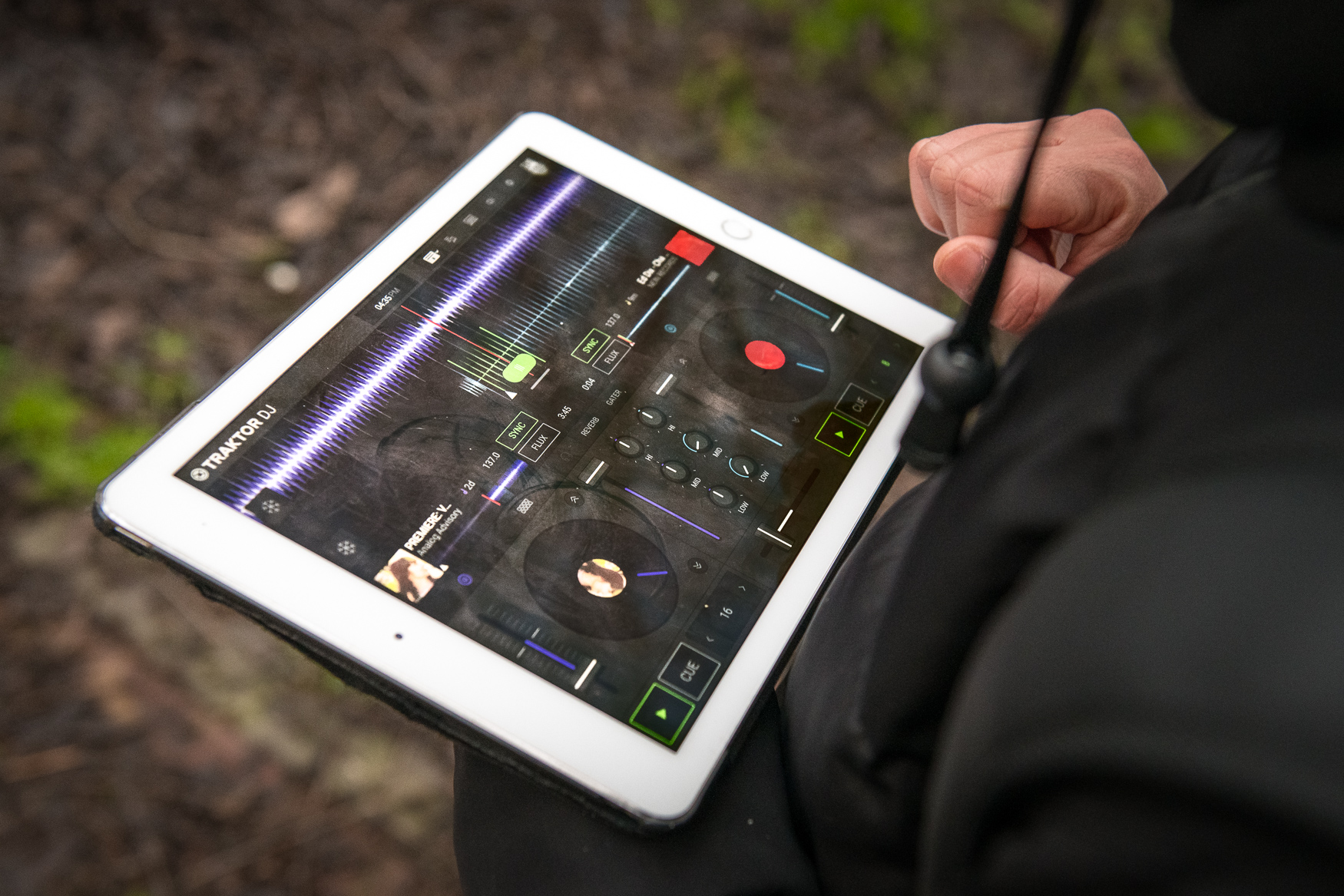 On this occasion, a group of people gathered at the Bellamyplein, Amsterdam West, excited for a proper Saturday afternoon swarm’ session. This swarm took place under the supervision of the enthusiastic, joyful Floor van Leeuwen, who set a sweeping example for all participants. They were accompanied by the imperturbable DJ Maoyi, who provided musical guidance. After a warm-up (including a little covid-protective choreography), each speaker’s sound was turned up, and the swarm began.

Of course, after months of dancing alone in bathrooms, living rooms, bedrooms, and kitchens, the streets seemed endlessly vast and hostile. The weather, the setting, and the timing all combine to create an unusual décor, to say the least. People felt strange, and dancing outside felt alien. However, this initial awkwardness with body and surroundings lasted no longer than 5 minutes. Within those few minutes, it could have just as good been a summer festival. The participants loosened up like Forrest Gump’s braces after his first-ever run into safety and freedom.

Besides this activity being pleasurable and fun, it also can transform space: transforming the street, the market, a shopping mall, and a parking garage, into a space of music and movement. The practice can transform the space around it by changing, or in this case, adding a function. Namely, leisure, pleasure, physical exercise (those wearing a smart watch were particularly content), dance, and social interaction: welcome additions to a public spaces predominantly accomodating consumerist attitudes.

Most Common In practices allow for people to contribute with ideas, presence, and gesture. For this swarm, people could sign up to participate. Those who did would receive instructions, a personal speaker for the music, and at the end a hot ginger tea for cooling down. Participation was, however, not limited to those who signed up. In fact, due to the dancing formation spread out through the Saturday Ten Kate Market, each dancer presented an invitation to passers-by and market strollers. Everyone could join in on the swarm, whether by enjoying and capturing the moment or by moving along.

People working at the market would shortly leave their tasks be for a sway of hips, and neighbors would come out of their houses to have their living room slippers have a meet and greet with the street. The winners of those participating spontaneously were undoubtedly children. Unrestricted by the weight of convention, it was no question for them to watch, listen, and decide to join (supervisors did not seem to mind).

Recently, a recurring topic one has been able to discern from the murmuring is that of loopholes (‘mazen in de wet’ in Dutch). People feel an urgent desire to reengage with and get back to aspects of their lives that they have been missing on an off in the past two years. People are creative and tend to develop ways to mold the world around them that are allowed, but perky. The swarming is one way in which the answer to this desire is sought and, in my opinion, also found. 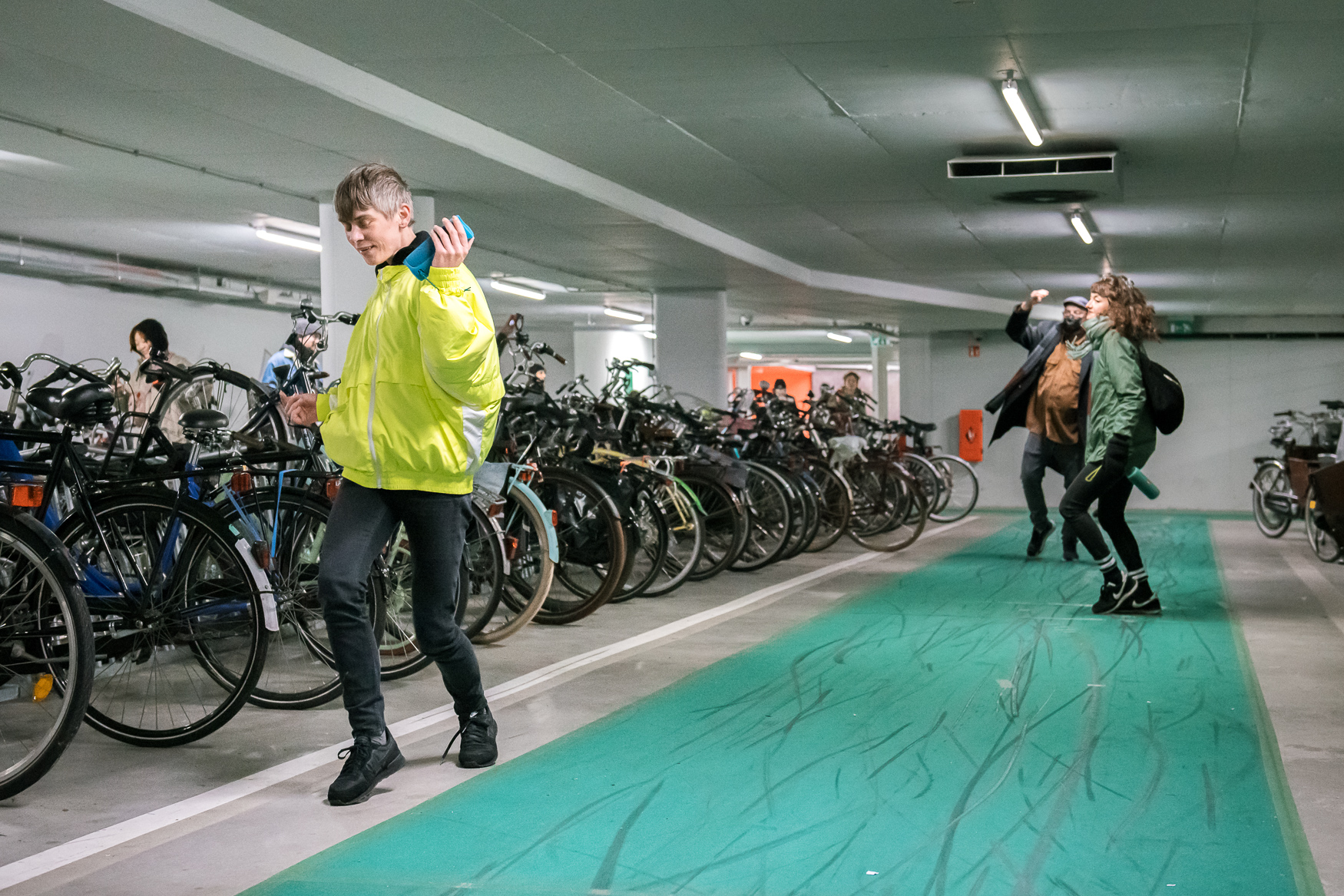 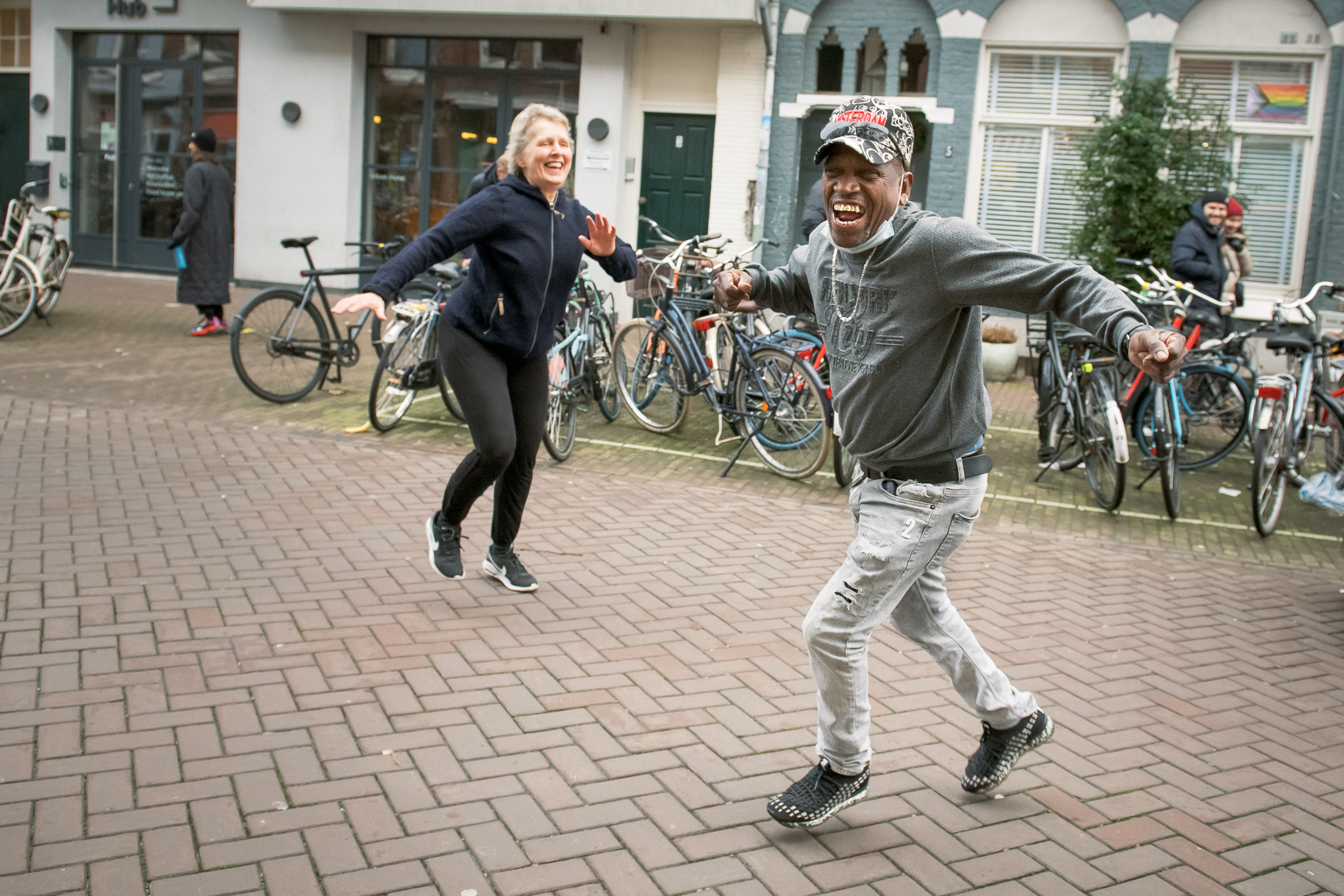 Another way in which this human tendency can be expressed is in commoning. To me, this swarming contained every aspect -be it temporal and small scale- needed for a commons-mindset. It showed the realization of, and an example to, the fluidity and adaptability of public space. It showed that there is potential social and creative value in this that adds to or transcends the built-in purpose of that space (not much unlike the market itself). It demonstrated the role that simple but collective acts of participation could play in manipulating the meaning of space. And this experience perhaps also showed us -once again- that we might benefit from r fearlessness shown by children.

Swarming the City was organised in collaboration with Floor van Leeuwen and DJ Maoyi. 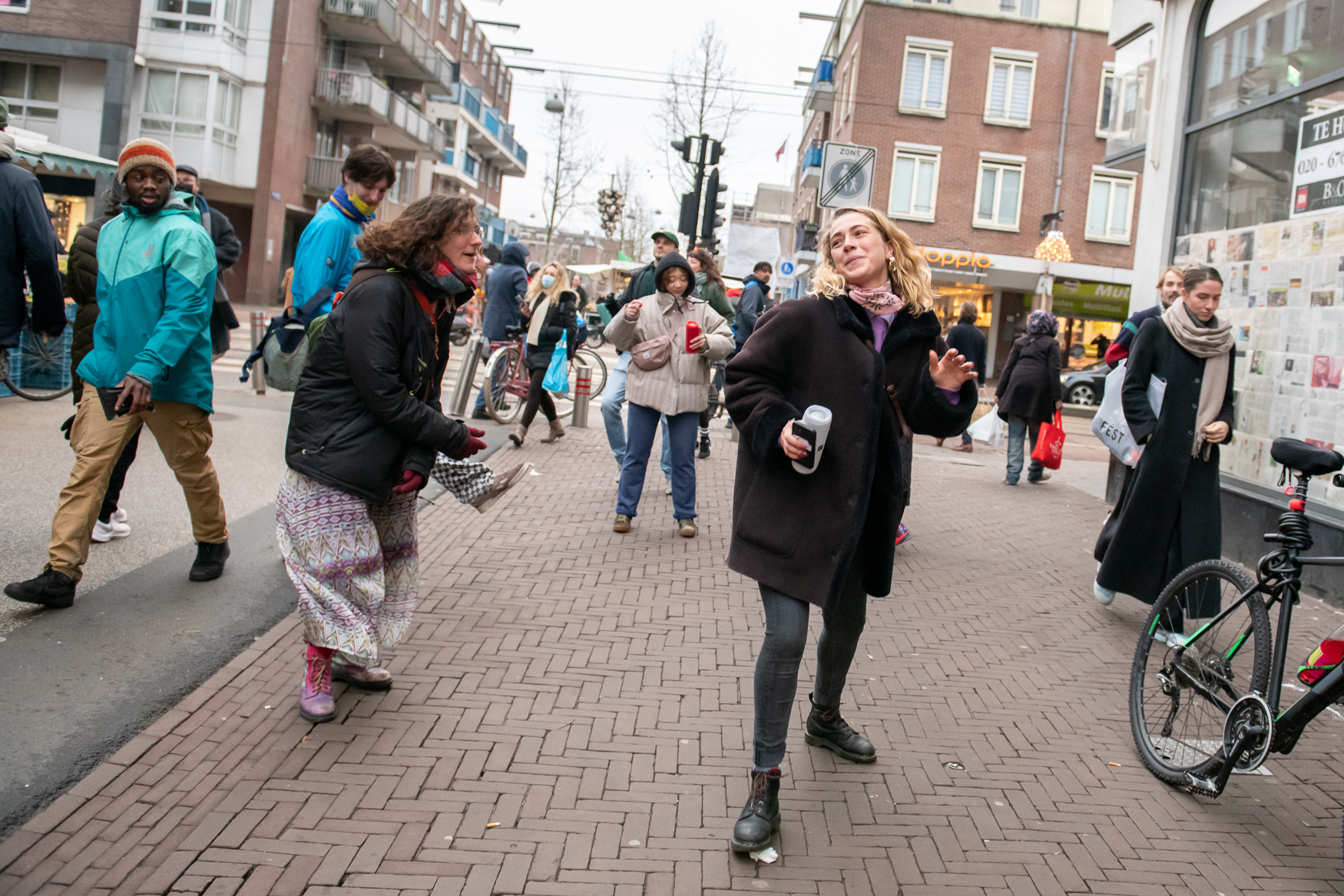 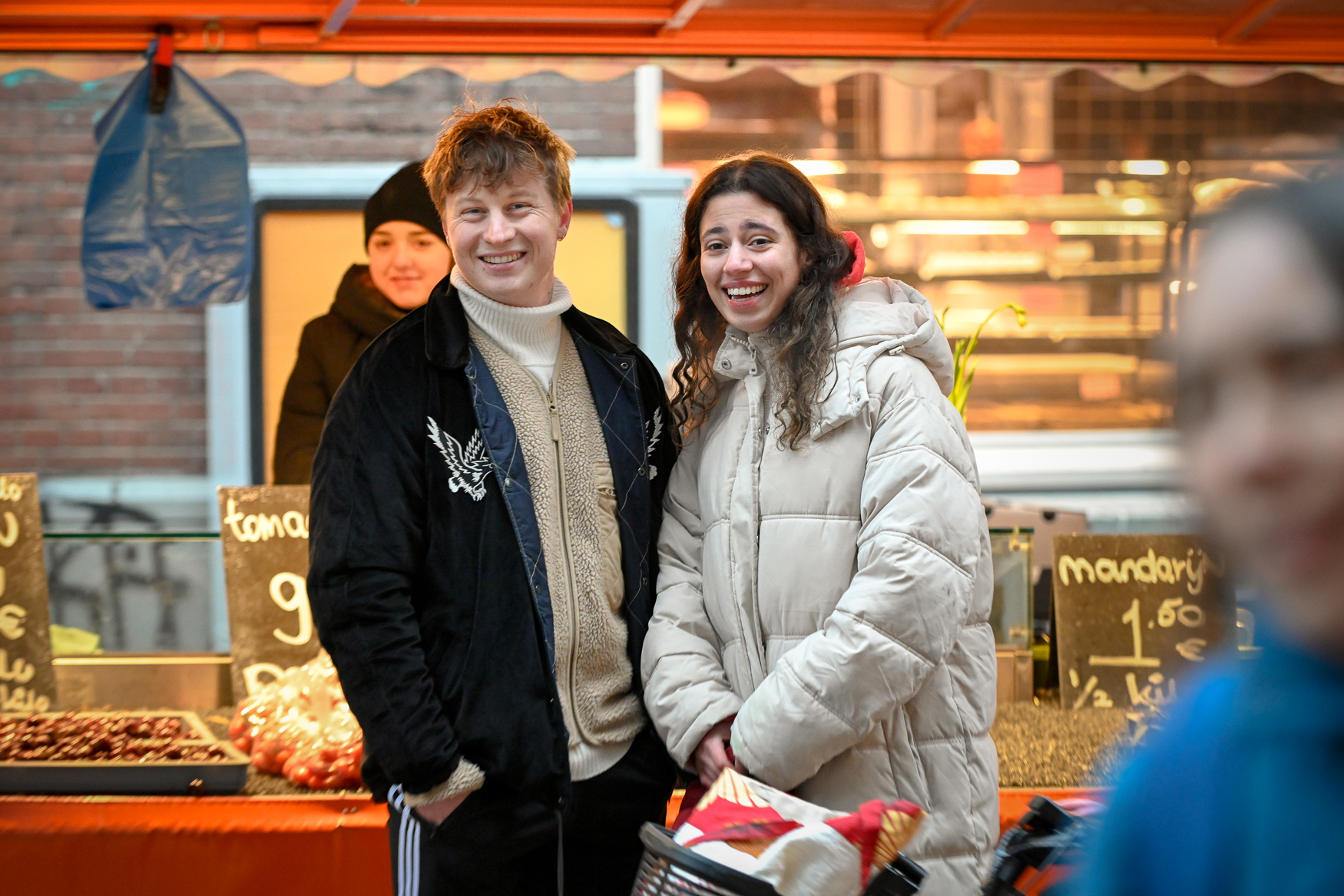 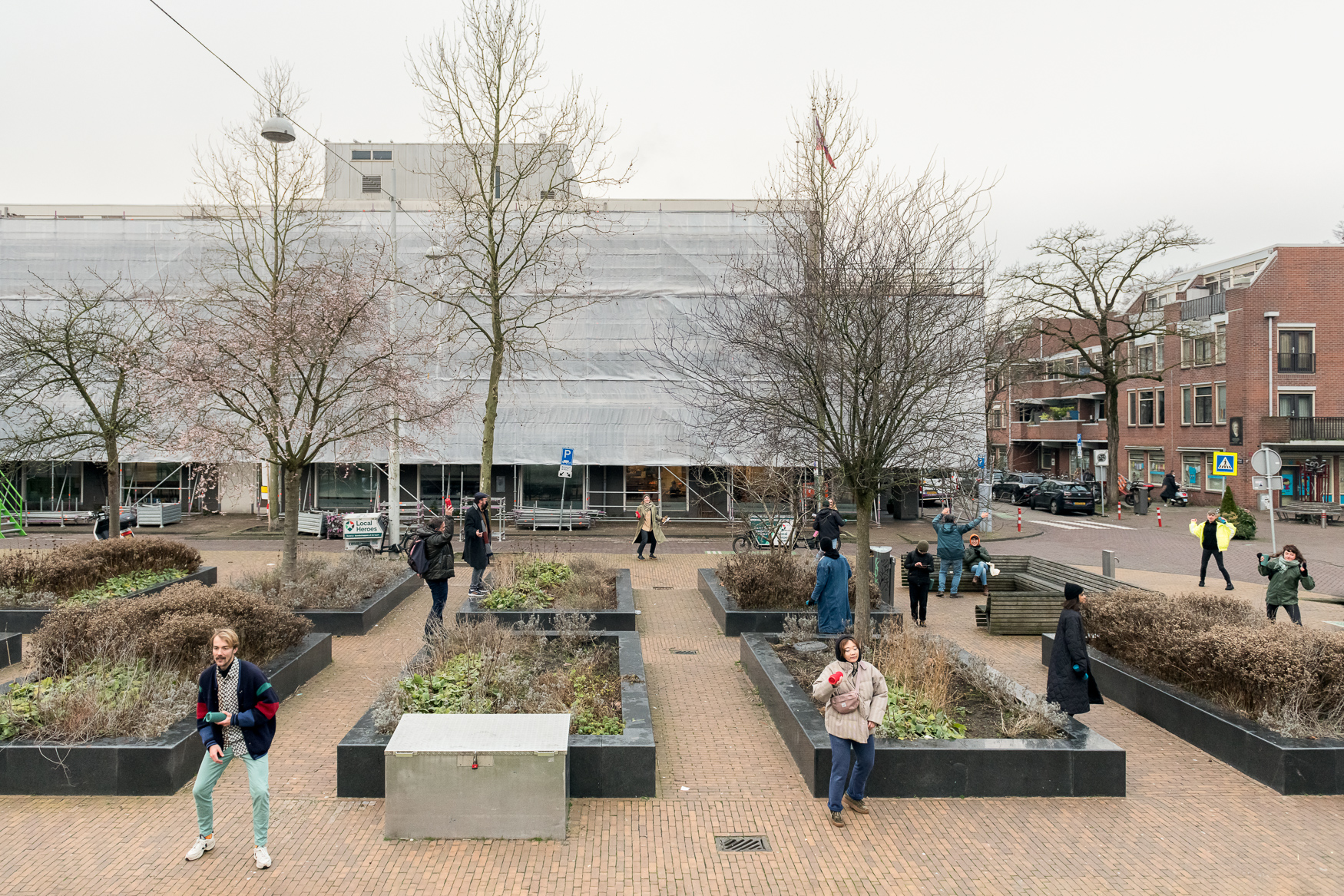 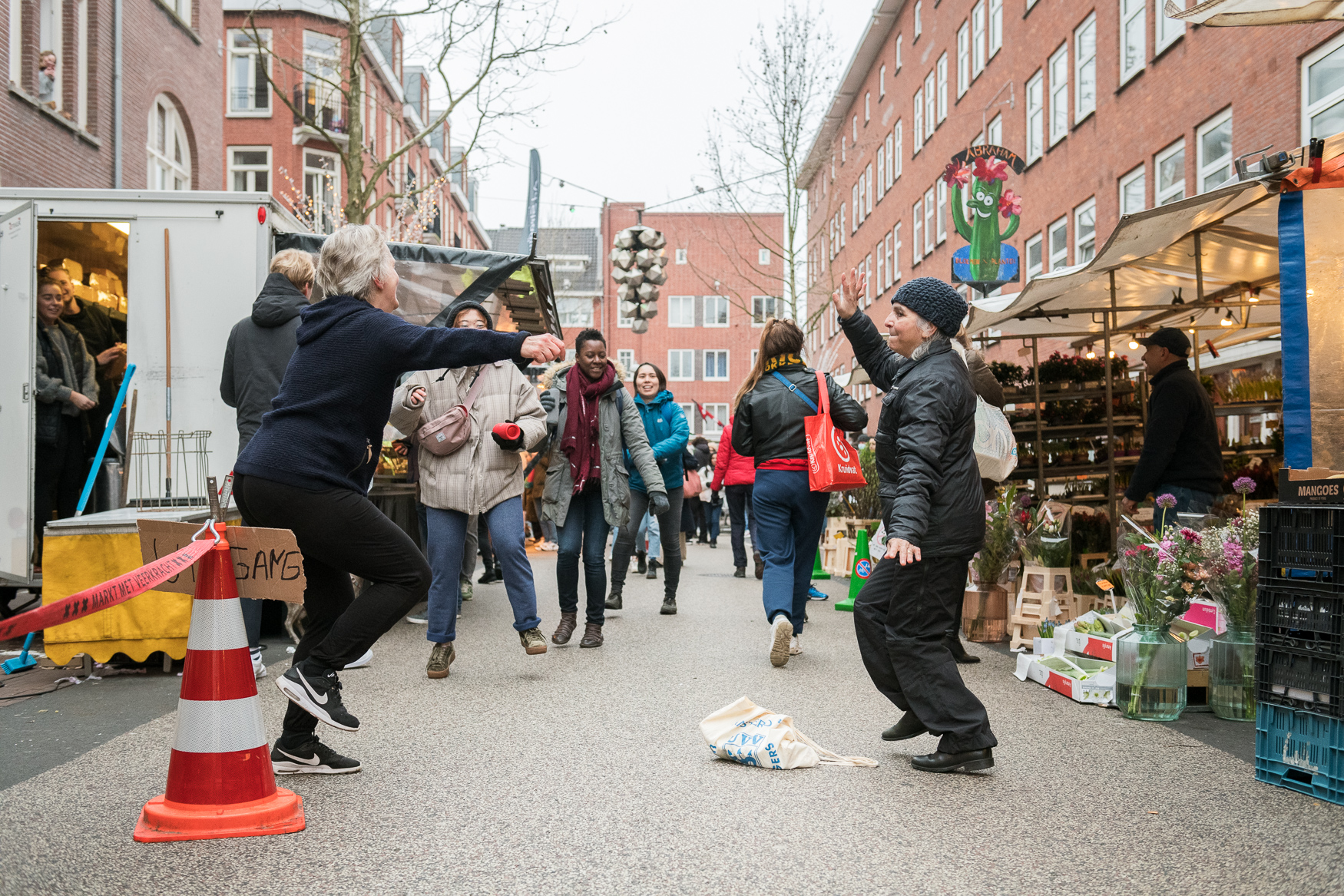 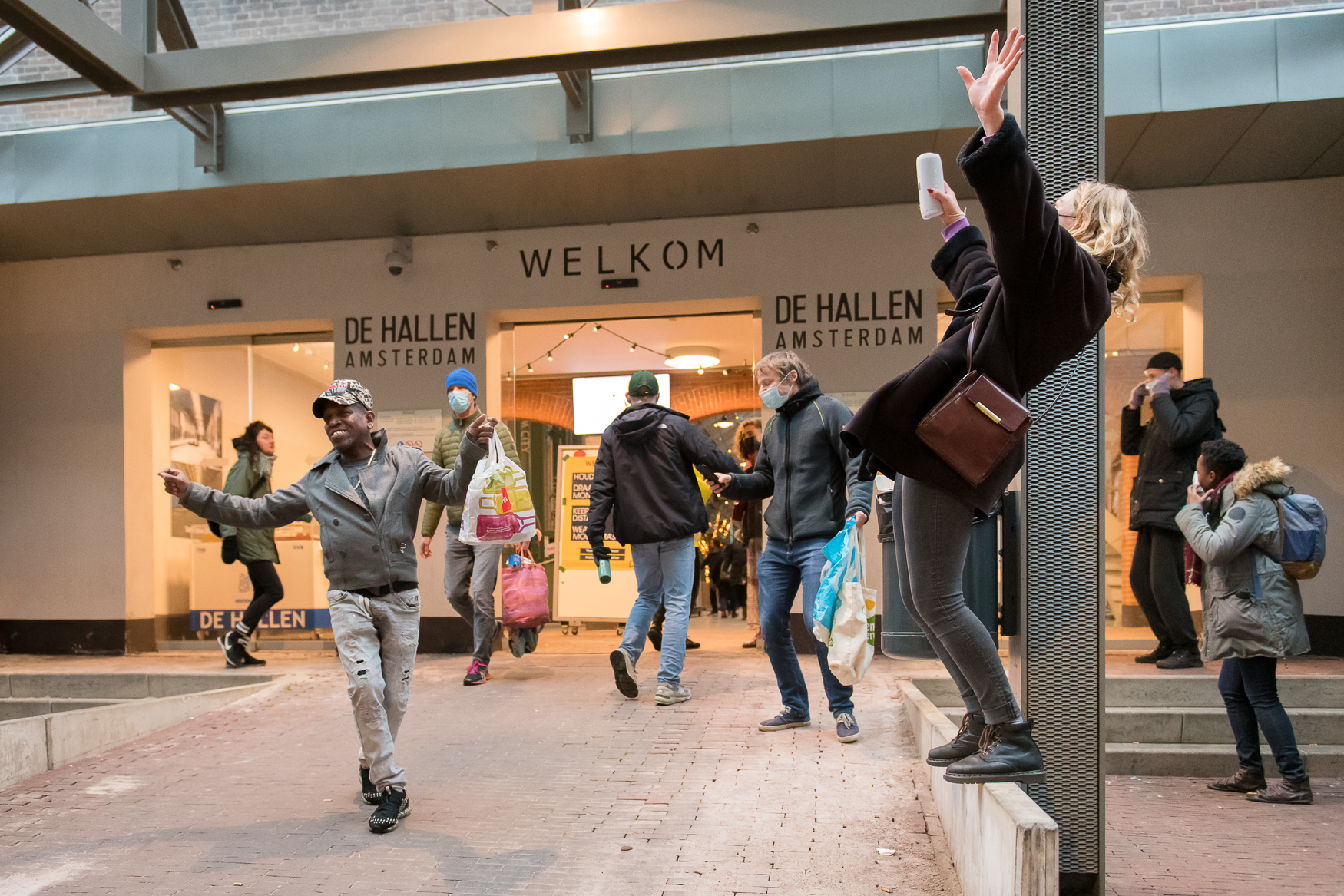 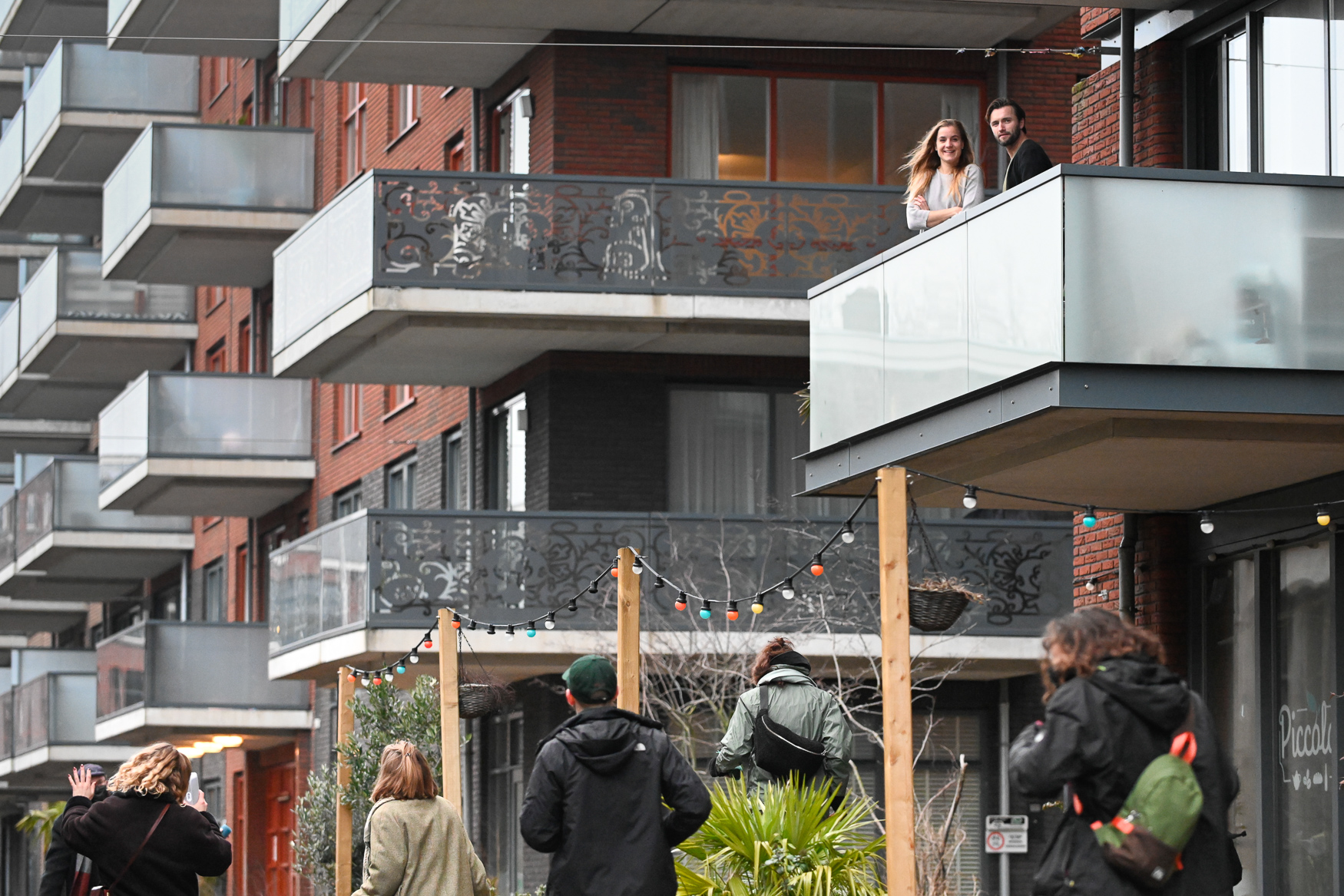